Do I really need to bother with this “I agree” thing?… 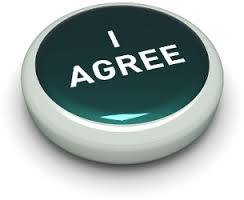 approve their site’s terms and conditions, they often make do with no more than a link on the landing page or on the registration page. When I try to convince them that the chances of being able to enforce those terms if there’s a conflict with a user are higher if the user has had to actually approve them, they usually insist, pointing out that their competitors are doing the same thing…

It is important to understand that although many sites do no more than link to their terms without requiring users to approve them, this approach is not the one most liked by the courts when asked to support your claims. Therefore, the chances that terms only mentioned in a link will be enforced are indeed much lower.
A site’s terms and conditions are a contract between the site and its users, and like any contract, the courts require the owner of the site to prove that both parties must have intended to create a binding contract between them. If it is not possible to show that the users knew they were committed to complying with the terms of the site, it will be difficult to prove that intent.

Of course, the extent to which users are aware of the terms and conditions of the sites they visit is debatable. One of the most open secrets about terms and conditions is that users simply don’t read them… In the vast majority of cases even when they’ve confirmed that they have read them, they haven’t. Nevertheless, the court’s position is that a user who hasn’t bothered to read the terms does so at their own risk since the law in most countries regards the approval of the terms as the act that makes them binding.

On the other hand, even if the site owner has done no more than place a link to the terms, rulings are not uniform and courts will examine each case on its own merits. The court is likely to check where the link was placed, how easy it is to see, how it can be read, and so on. One of the rules of thumb is that a link placed at the top of the site will be more binding than a link placed at the bottom of the site, especially if the user needs to scroll down to see it. But do you really want the legal validity of your terms and conditions to depend on those interpretations?…

Despite all this, it is impossible of course to ignore industry practice and the desire of entrepreneurs not to place too many demands on users, especially compared to their direct competitors… So this is a business decision that each client has to make for themselves, bearing in mind the site’s activity and the potential for a dispute with the users among other things.

Is your website, for example, offering a service that involves payment (which raised certain sensitivities of course)? Can users suffer financial or other kinds of damage? The higher the chances of a conflict because of the terms of use and the site’s activity, the better not to make do with a link and to demand instead that users explicitly approve the rules. Take an informed decision and do what is right for your business.